On: The Land Down Under

“G’day mates and ma-tesses!” Well, we’re off to the Land Down Under.

So waltz Matilda and tie me kangaroo down sport, we’d put some shrimp on the barbie for you, but I don’t really think they say this in Australia? 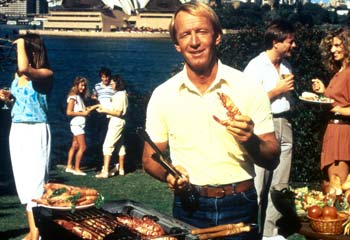 Paul Hogan, yep the same mate that played the lead in the ‘Crocodile Dundee’ movies

“Shrimp on the barbie” is an often-quoted phrase that originated in a series of television advertisements by the Australian Tourism Commission starring Paul Hogan from 1984 through to 1990. The actual quote spoken by Hogan is “I’ll slip an extra shrimp on the barbie for you”, and the actual slogan of the ad was “Come and say G’day”. It has since been used, along with some variations, to make reference to Australia in popular culture.”

This site uses Akismet to reduce spam. Learn how your comment data is processed.